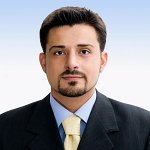 I was born in Požarevac where I finished high school. In 2007, I graduated at the Faculty of Electrical Engineering, University of Belgrade (UB). I am employed in this laboratory since July 2009. I was involved in the experimental research of atmospheric pressure plasma discharges, laser induced plasma spectroscopy in air and underwater and pulsed laser deposition. The research in the field of plasma diagnostics of laser induced plasma was the subject of my PhD thesis, and in October 2014, I obtained the PhD degree from the Faculty of Electrical Engineering, UB. During a period 2010-2013 I was involved in several projects (through Laser Lab Europe projects and bilateral project “Pavle Savic”) with LP3 laboratory from Aix Marseille University in France in the measurements of Stark broadening parameters in laser produced plasma. In the July 2014, I was visiting researcher at Institute of Physics, Jagiellonian University, Department of Photonics, where I worked on the experiment of Thomson scattering of laser-induced plasma.

Since October 2014, I am a postdoctoral fellow at the Plasma Laboratory at the Department of Particle Physics and Astrophysics, Weizmann Institute of Science (WIS). The subject of the current research at WIS is diagnostics of plasma implosion with pre-embedded magnetic field using magnetized z-pinch plasma configuration.

My other interests are photography and fitness.

OI 171014 – Spectroscopic diagnostics of low-temperature plasmas and gas discharges: Spectral line shapes and interactions with surfaces – National project – Ministry of Education, Science and Technological Development of the Republic of Serbia

TR 37019 – Electrodynamics of the atmosphere in urban areas of Serbia – National project – Ministry of Education, Science and Technological Development of the Republic of Serbia

Weizmann Institute of Science. Investigation of the helical structures, current flow, and 2D effects in compression of plasma embedded in magnetic field
A fundamental investigation of the physics involved in the compression of axial magnetic fields by an imploding plasma column, a subject that is relevant to both laboratory and space plasmas. Recently, it has gained much interest due to advances in employing the concept of magnetic-flux compression for controlled fusion purposes (MagLIF).